The History of the Ranch

It all started with the birth of the then named CBC (Cohn-Brandt-Cohn) Film Sales Company of New York, in 1919.

A small company that distributed short subject films, such as the Hall Room Boys. By 1924, the CBC moved from New York out west and developed into Columbia Pictures Corporation, a motion picture studio, which housed itself on the corner of Sunset and Gower streets in Los Angeles, California. The Studio made numerous shorts and movies, but had to rent neighboring movie studios 'Back-lots' for outdoor shooting most of the time, due to the lack of space on its own facility at the Sunset lot.

The problem was solved by 1934, as Harry Cohn, head of Columbia, acquired a 40 acre lot on the other side of the Hollywood Hills in Burbank. The corner of Hollywood Way and Oak Street was the perfect location for a "Back-Lot" as it was still rural enough to be landscaped as the studio needed it to be.

A view of  First National Studios (Warner Bros.) in 1927, showing in the background what would become the 40 acres Harry Cohn of Columbia Pictures Corporation would purchase for his studio in 1934.

On a map from circa 1929, streets like Greenland, Kenwood and Maple street, still plotted to run through the area of what will become the Ranch. It shows the non-developed area on the west side of Pass Avenue to Clybourn street which was purchased in 1949, after the Ranch itself was already bustling with Western sets and New York streets, to use for "Outdoor scenes requiring primitive areas". But by the late 1950's the surrounding neighborhoods had already grown and the horizons no longer were bare enough to use as a backdrop, and so the lot sat vacant for almost 10 years. It was eventually sold in 1960 to a development company and now has apartment units sitting on it. 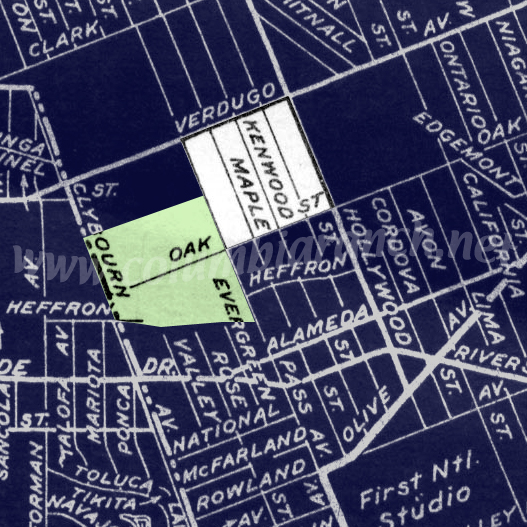 By May of 1936 shooting began for a colossal movie named 'Lost Horizon' and a massive set was constructed for the film near the corner of Verdugo Ave and Hollywood Way.  A large mountainesque landscape was created with pathways down to a 3 story Lamasery complete with garden and a water fountain.

Parts of the 'mountains' would be redressed and the set completely enclosed for the movie 'Only Angels Have Wings' a few years later.

The Ranch in late 1936 with the massive set for Lost Horizon in the upper right corner. Photo courtesy of Kendall Miller/Photo credit: Alfred S. Keller

According to news reports  in 1935,  along with the set for Lost Horizon, the movie 'Rolling Along' was said to have been the largest outdoor sets ever erected for Columbia Pictures. For the latter, a 'Showboat' set was created, complete with surrounding water basin, along with a 'Depot' (later becoming part of Colonial Street) and numerous facades (later part of the Western Street sets) were constructed. Just a few years later Columbia would outdo that record with the set for 'Only Angels Have Wings', which utilized what was leftover from the 'Lost Horizon' set. The area was completely enclosed to form the Havana harbor complete with (half) a Steamboat, dock and water front.

The other massive set for the movie 'Only Angels Have Wings' before enclosure.

Although these sets would be utilized for many years to come, new sets and structures were constructed as well. The Western Streets and the Park were created, along with a suburban style street and a modern style street. Another  boat dock complete with a partial Steamship behind the Kirby Building and an Elevated Subway track were also constructed, along with a massive Scene Dock storage to hold all the multitude of sets constantly being utilized.

Early Serials, such as The Three Stooges, Boston Blackie, Captain Midnight, Batman and the Superman shorts to name a few, made use of these sets on a regular basis.

The set for Lost Horizon 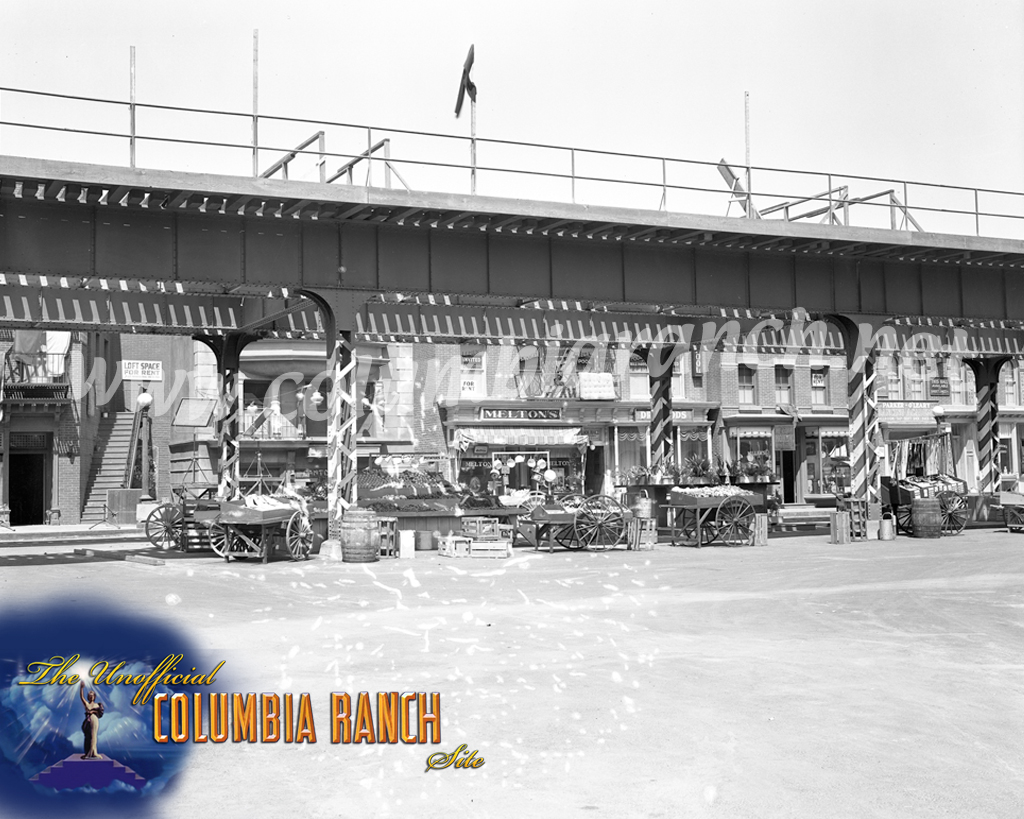 In the 1960's, the Ranch was booming with business. Not only were movies being filmed on a regular basis, but with the dawn of Television sets in almost every American home by now, Columbia redeveloped their ScreenGems productions to produce specifically for television, and thus the Ranch was the first to be utilized for productions geared towards the TV audiences.

Shows like "Father Knows Best", The Donna Reed Show", "Dennis the Menace", "Hazel", "The Farmer's Daughter", "Grindl", "The Second Hundred Years", "Our Man Higgins", "Gidget", "Bewitched", "I Dream of Jeannie", "The Flying Nun", "The Monkees", "Route 66" and many others were part of the daily order at the Ranch.

By mid 1971, Columbia and Warner Bros studios decided to combine their forces in order to combat the financial troubles, either one encountered, and formed a merger under the name The Burbank Studios. In doing so, the Ranch became a true "Back-back Lot" as the Burbank Studios (WB's main Lot) already had a massive Back-Lot.
Although still active, the Ranch had fallen further in disrepair and structures and facades were just left to their fate.

By 1970, most of these shows, unfortunately, had ended or were coming to an end, and the Ranch was starting to show signs of slight disrepair. Columbia had financial trouble and to make matters worse, a catastrophic fire in January of that year, destroyed a quarter of the lot. Half of the Western set, the Colonial/European set and 90% of the Blondie house were gone. Although quickly rebuild, because numerous shows like, Bewitched, I dream of Jeannie, Here Come the Brides and The Partridge Family were still in production, another fire in April, in the same area, and another fire in August of that year,  made it difficult for some of these show to film, it also put another financial strain on the studio. 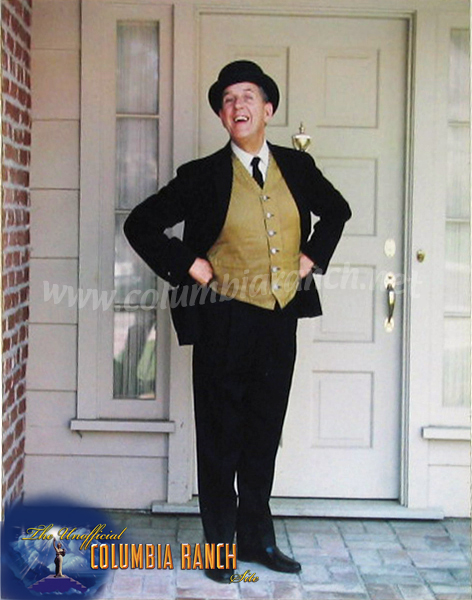 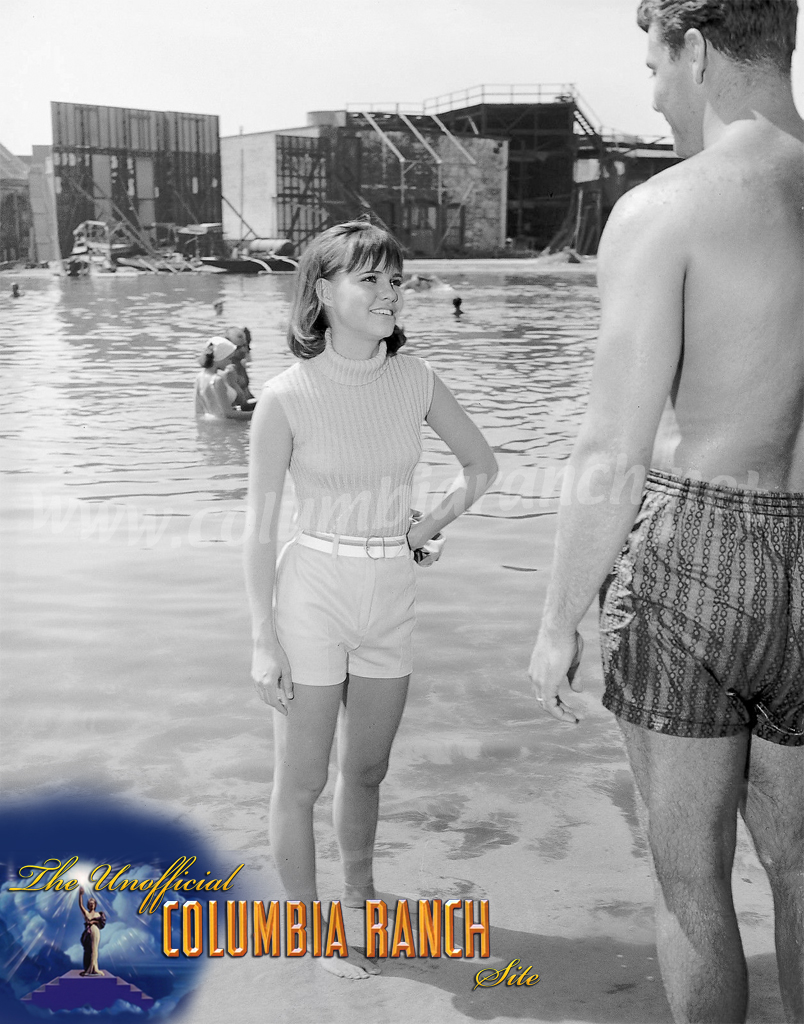 Stanley Holloway taking a break during filming of "Our Man Higgins" 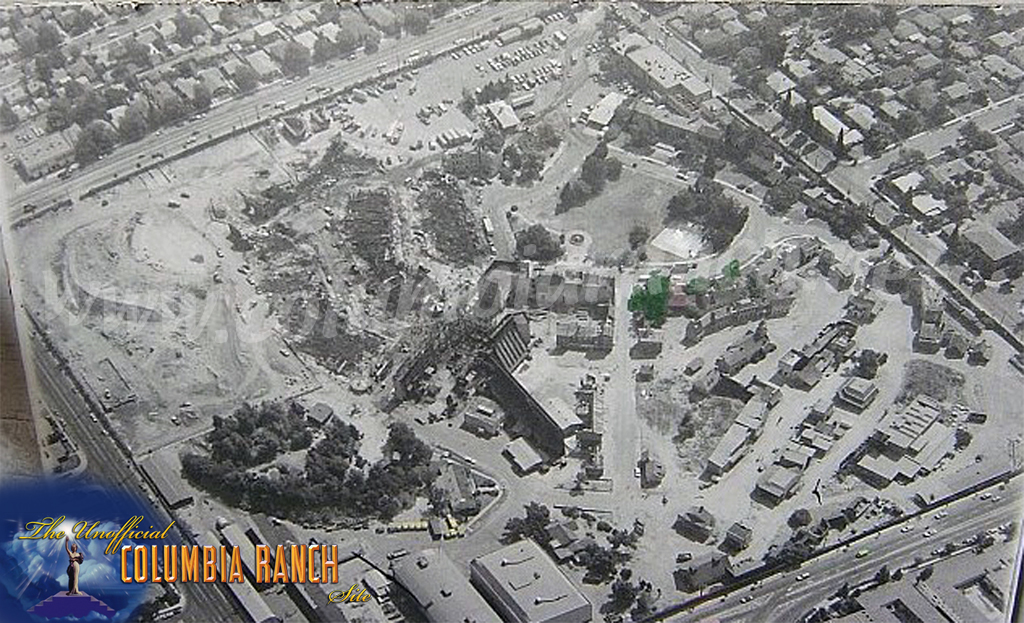 The chared remains of the massive New York street set after the 1974 fire. To the left, traces of what used to be the Lagoon area.

With the 8 acres sold off and the fire having destroyed the city street sets, TBS (The Burbank Studios) razed the entire area and built up a new 'berm' to 'hide' the shopping center being seen from the Ranch.  Several plans were tossed around, including one's to create a new city Street and even a waterfall & Lake. In part for shows like 'Police Woman' and 'Wonder Woman' which were in production there at the time.  None of these plans came to fruition and the entire area was re-developed numerous times over the following years. Finally in 1977, a  'Beach Front' like setting for a new show called 'Code R' was created. The show however did not last a full season but the sets were redressed and used for several years and the 'Beach front' was turned into a water plane docking ramp, starting the second season of 'Fantasy Island'.

In mid 1974, 8 acres of the lot were sold off, at the corner of Hollywood Way and Verdugo, the area where the Lagoon and one of the Berms were originally located, to make way for a shopping center. While in the process of demolishing and during the first Annnual Burbank Community Fair that was being held at the Ranch, on the weekend of September 9th, 1974, the entire New York set burned down to the ground., including most of the Fair's rides and stands. One third of the Ranch was gone and would never be rebuild. 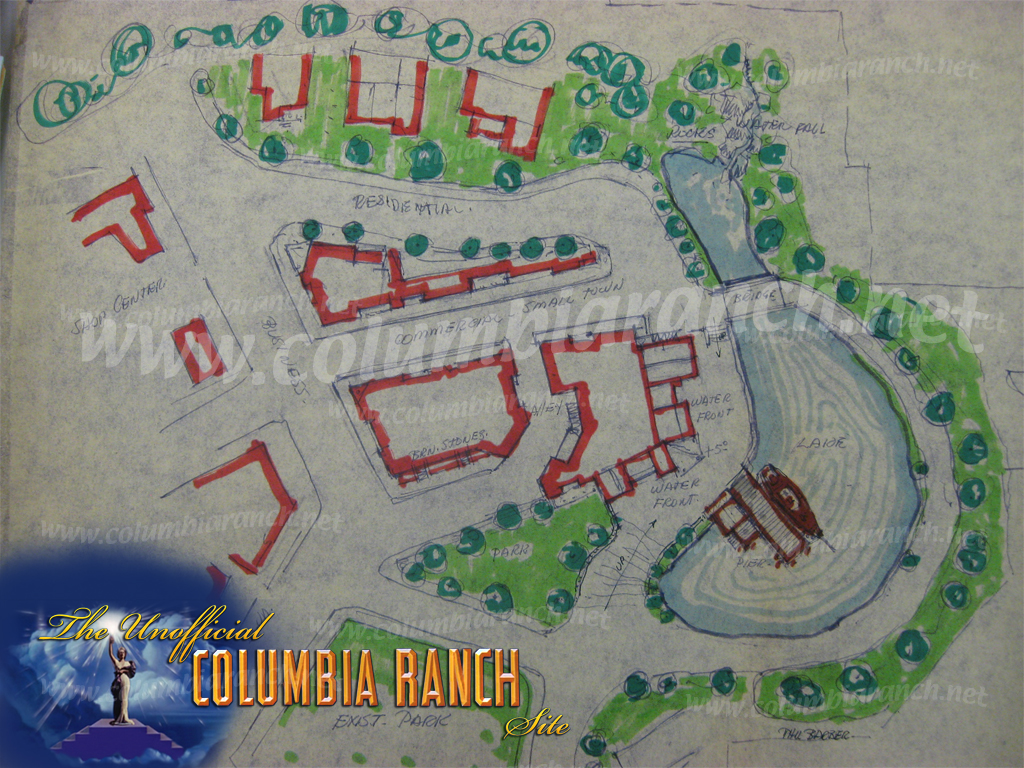 TBS (The Burbank Studios) decided to clean house a little and removed what was left over of the Little Egbert street buildings, part of the water tank and cut in to what used to be part of the Western Street set for the production of the musical '1776'.

The new combined Columbia and Warner Bros. studios logo for The Burbank Studios.

The next decade saw a few more changes to the Ranch. The new 'Lagoon and Beach front' was filled in and leveled at some point and production office contructed on that spot. The remaining area, where Modern Street and the Boston Row homes used to be, was landscaped to accomodate "Mr. Miyagi's" house for the 'Karate Kid III' movie.

More information will be added soon!

By the 1950's, the Columbia Ranch had established itself a major movie studio Back-Lot and was producing 'round the clock blockbuster movies, such as 'The Stranger Wore a Gun', 'High Noon', 'The Wild One', '3:10 to Yuma', and 'Good Day for a Hanging'. Many of the existing sets were re-used and re-dressed for all these and more films, sometimes so major that one would not recognize them unless one knew the Ranch.

The same Western Street set from two different movies, showing the drastic changes of the same facades.  To the left, 'The Wild One' and to the right, 'High Noon'. Both filmed from similar perspectives. 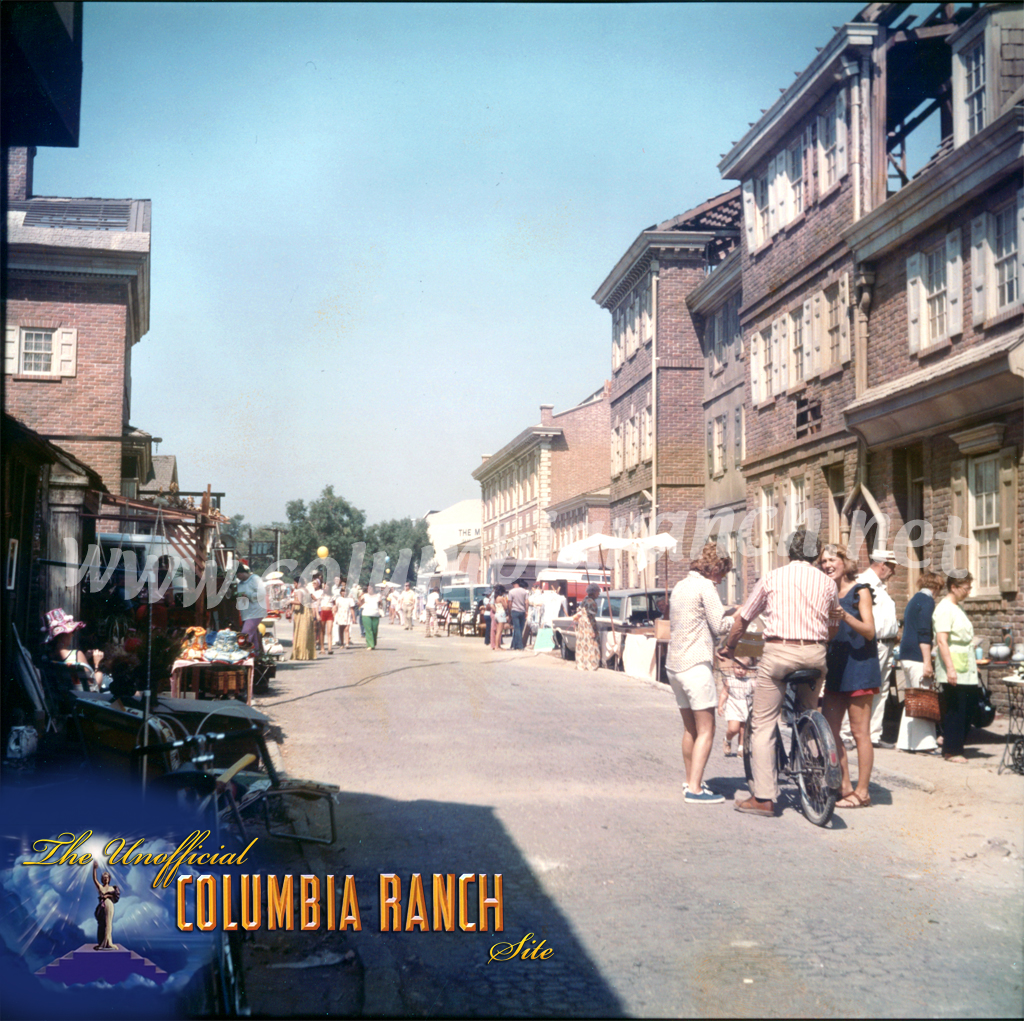 A rare glimpse of the 'province town street' especially created for the musical film adaptation of '1776'. The front half was originally Little Egbert Street but was extended all the way to the Western Street set, having cut right through the Water 'Tank' specifically for the movie. It remained that way for several years.

One of the designs plans for a new Business, Commercial and Residential street, complete with  Lake and waterfall.